We are all looking for something better to come along and we’ve all been guilty a time or two of hoping that fate would present a sign that things were going to get better. Of course these signs don’t always come along, at least not in the way we expect them to.

END_OF_DOCUMENT_TOKEN_TO_BE_REPLACED

The game is survival. The playing field is the harsh frozen Alaskan tundra. The opponent? Ravenous wolves. Yeah, it sounds a bit silly but “The Grey” takes itself very seriously. Throw in Liam Neeson, who is quickly becoming one of the biggest bad asses in movies today and the result is a tense action thriller directed by Joe Carnahan (Smokin’ Aces, Narc). 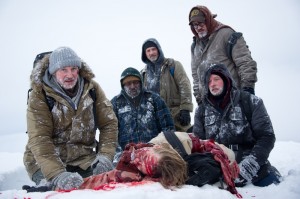 We are introduced to the main protagonist, Ottway (Liam Neeson), who early in the movie seems slightly suicidal. He is haunted by visions of his wife. He boards a plane as part of a team of oil workers heading to the Alaska. The group is your usual rag-tag group of tough guys. There isn’t much time for character development before the plane goes down in an intense crash sequence. Only seven men survive the crash. This is where the movie gets surprisingly interesting. Stranded in the frozen Alaskan wasteland, the men must fight not only the freezing cold temperatures to survive but a pack of gigantic wolves that seem to be hunting the men as they try to find rescue.

To the man, each character seems pretty cliche but they are each portrayed in a way that makes them feel real. Each of them is given a moment to build character that is usually followed by someone being torn to shreds by the wolves. If it seems dark, it is. As for the wolves, they’re handled in a manner that makes them menacing monsters but given these guys are on their territory, it makes sense.

On the surface “The Grey” is almost like a slasher film but instead of some crazy maniac you have– yeah– wild dogs. It’s quite brilliant actually. But the movie is so much more than that. As these men, led by resident bad ass Liam Neeson, try to get to safety, they not only bond with each other but embark on an existential self explorational journey. These men are sure they are going to die either from freezing to death, starvation or just having their faces eaten off by one of the monstrous wolves. It is an interesting take on the strength of the human spirit.

But the real fun comes when the wolves are hunting them. Sometimes it seems like they are taunting Liam Neeson and his buddies. It’s like Jaws has been reincarnated as a pack of man eating dogs and let loose on some primal hunting game. It’s tons of fun and one hell of a movie.

Steven Soderbergh has made some of my favorite guilty pleasure movies in the last ten to fifteen years. I love “Out of Sight”, “The Limey”, “Traffic” and “Solaris”– even the “Ocean’s” movies were at least, for the most part, solid entertainment. Lately though, it’s starting to seem more and more like Soderbergh may have completely lost his mind. “Magic Mike” was awful. “Contagion” was — okay. I went back and watched “Haywire” and it’s just another gimmick movie that is completely void of everything that made some of his early work so great.