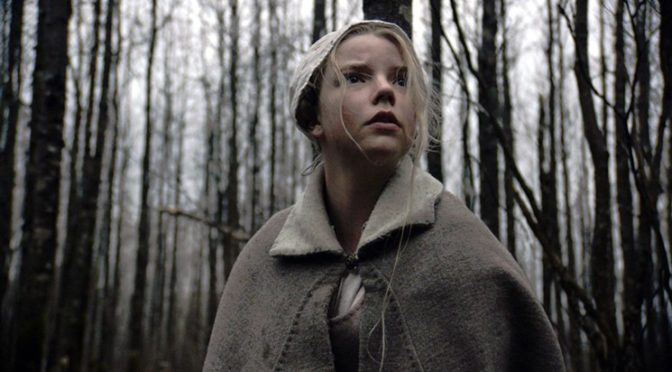 A haunting tale that will question your beliefs

Horror movies are fun, because we all like to imagine ourselves in these wildly impossible but wonderfully horrific situations. It’s why we all go to haunted houses — even those who pretend they hate them, but do them anyway. Scary situations are fun as hell when you know you can just walk away after 90 minutes or so and go back to your life. But the really good horror movies are the ones that stay with you after you leave the theatre, the ones that make you think and question what you believe about the paranormal or – gasp! — your religious beliefs.

That’s what makes “The Witch”, from writer/director Robert Eggers so much different from all these run-of-mill wannabe horror flicks. This one gets inside of you. It makes you question your belief system and then it stays with you. Have fun sleeping after this one.

Here’s what you need to know about “The Witch”:

Yes, but it’s so much more than that. Eggers creates an eerie atmosphere that slowly sinks its claws into you, deeper and deeper as the movie progresses. It’s unnerving more than anything. It’s not a slasher flick and it’s not a typical witch-flick. It’s gruesome at times and creates a thick feeling of paranoia that will haunt you long after you see it.

What is it about?

“The Witch” begins with a farmer and his family being banished from a colonial town in 1630 — years before the Salem Witch trials. It’s never quite clear why, but there are subtle hints throughout the film which suggest religions differences, something that becomes a deeper theme as the film progresses.

So, this family sets up a home on the edge of a forest, hoping they’ve found land that will allow them to live and farm successfully. Not so fast.An evil dwells in the forest and soon the family is being infected, turning on each other. Eggers uses a lot of real stories about witchcraft from the time period, which is both a blessing and a curse.

Oh great, another one of those “based on true events” b.s…..

Yes….and no. It’s is tagged as a “New England folk tale” and borrows from stories and legends from the time period. It’s not based on “real events” but the idea that stories like this exist from over 400 years ago is horrifying enough. Eggers uses these legends as jumping points for events in his film, rather than simply trying to convince you it’s real. But at times, it feels a little those little nuggets are thrown in for reference, not always connecting.

Low, but highly effective. Too many horror movies use blood and gore as a crutch. Gore isn’t scary unless it’s the end result of something truly terrifying. “The Witch” keeps it’s gore factor at a minimum, instead it haunts you and torments you so that when you do see a little blood, you’ll wish you hadn’t.

How does it differ from other horror movies?

Let’s be honest. Most horror movies are the same mix of cliched characters and predictable jump scares with perfectly timed but equally obnoxious music to maximize your fright awareness. “The Witch” is a slow burn in the truest form of the word. At times it feels like nothing is happening, but throughout the 90 minutes of running time it injects a sense of dread and paranoia that is hard to shake.

The beauty of this film, aside the fact that it looks creepily gorgeous, is that the familiar horror tropes are still woven into the DNA of this flick, in surprising and shocking ways.

How is the cast…famous actors in horror movie can be distracting?

Agreed. Thankfully, Eggers employs a cast of relative unknowns, there are a couple of actors that huge “Game of Thrones” fans may recognize from smaller roles — Ralph Ineson and Kate Dickie. But, it’s Ana Taylor-Joy who shines as Thomasin, the teenage daughter who becomes the center off attention and speculation of witchcraft and black magic. The predominantly British cast plus Eggers excellent screenplay with uses spot-on dialect and language from the time, keeps the film’s realism on point.

“The Witch” may not play to casual horror fans. It’s slow at times and steers far from the silliness and predictability of most modern horror films, but once you let it in…it’s hard to shake the dread that this horrifying and clever flick will burn into your soul.

Written and directed by: Robert Eggers

The Witch (photos and video property of A24)