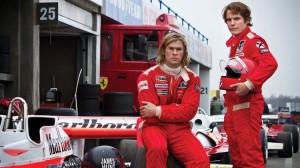 If you are a race fan, you know how dangerous Formula One Racing is and just how crazy you have to be to do it. The year is 1976. Great Britain’s James Hunt  and Germany’s Niki Lauda are two of the best drivers on the circuit. They hate each other, but they also respect each other. It’s that desire to out-drive the other, and to be the best that sparks the passion that fuels this race season and cements their rivalry as one of the greatest in sports.

The casting of Chris Hemsworth as James Hunt and Daniel Brühl as Niki Lauder is what absolutely makes this movie. For Hemsworth, this is easily his best role. No offense to the God of Thunder, but he is perfectly cast as the playboy race car driver with a death wish.

But it’s the chemistry and intensity both he and Brühl bring to their characters and their scenes together. This is a movie about one of the fiercest rivalries in sports and both of these actors bring their A-games.

Fans of auto racing will love the race action, but you don’t have to be a race fan or a sports fan to love this movie.

Photos and video are property of Universal Studios