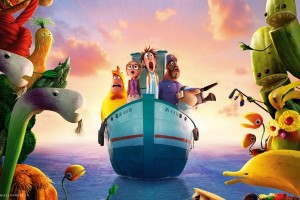 Animated movies are hit and miss. This year has seen a few good ones, but a few bad ones as well. “Cloudy with a Chance of Meatballs” fits into the second group of films, although it still features some deliciously fun animation.

The sequel to the 2009 hit, which itself is based on a children’s book, proves that at least when it comes to story development, there isn’t much originality left in the old cookbook. The jokes are rarely funny, and the characters, despite some solid voice talent, are instantly forgettable.

The sequel, after a bit of a recap of the first movie — as if the plot had been so hard to follow — picks up pretty much where the other one left off. And then it pretty much copies every little plot beat. Our hero, Flint, must deal with the aftermath the destructive wake his creation, the Diatonic Super Mutating Dynamic Food Replicator — or FLDSMDFR for short — has left behind in order to save his town of Swallow Falls.

The animation is about the only thing this film has going for it. There are some really cool “food creatures” on display that kinda make this an animated Jurassic Food Park.

WARNING: if your kid doesn’t have ADD going in, he or she will on the way out. The characters are always moving and twitching while on screen — probably because none of the jokes are funny so they constantly have to be doing something stupid to get any laughs out of its young audience.

Cloudy with a Chance of Meatballs 2 theatrical trailer:

Photos and trailer are property of Columbia Pictures